The Mayor of Earley was delighted to be invited to Trinity Band’s first concert of 2022 on Saturday 2nd April.  The Mayor welcomed everyone to the concert in the fabulous Michael Malnick centre at Leighton Park School and commented how pleased she was to be in the audience for the Song and Dance concert in the band’s 21st year. The band takes its name from Trinity Church in Earley, where the band first practiced. Since then, it has grown immensely and the Mayor noted how proud she was that the award winning symphonic wind band had its roots in Earley.  The concert had a wide variety of music from Dances with Wolves to the Emerald isles toe tapping Riverdance.  The concert was also sponsoring the local charity Cowshed, which is the band’s chosen charity for all the concerts this year.  Further concerts are planned for the Queen’s Platinum Jubilee in June and the band’s 21st anniversary in September. 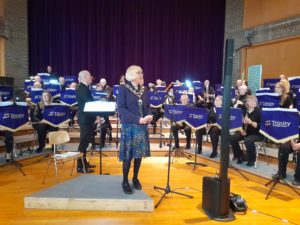